All Male Characters Wiki
Register
Don't have an account?
Sign In
Advertisement
in: Male Heroes, Heroes, Characters,
and 20 more

Adrien Agreste is one of main protagonists from Miraculous Ladybug series.

Adrien is a dreamer and charismatic, but is also often shy, a bit reserved, and considerably innocent — particularly due to his unfamiliarity to much of the world beyond his father's reach. Even though he is not very openly emotional to most people, he is friendly, empathetic, understanding, and encouraging to others in hard times. His will for exposure, change, and making friends definitely complements his personality, although it is a bit of a struggle for Adrien due to his busy schedule. Because of his innocence and kind heart, Adrien is very willing to give second chances to others that have cruel or mean intentions, like Lila and Chloé, believing that with enough patience and time anyone can change. However, he will defend his friends if matters go out of hand.

Due to his kind heart he can be oblivious at times to the darkness or mischief that are in hearts of others like his father or his cousin Felix.

Adrien's shyer, gentler characteristics can be observed in awkward or uncomfortable situations, or scenarios with particular people. This was shown when he nervously asked Marinette to sign his copy of Jagged Stone's new album, shyly greeted Ladybug in Simon Says, posed with Marinette as their alter-egos in Clara Nightingale's music video, displayed shyness about going on a date with Kagami alone in Frozer, and tried to make Marinette more comfortable around him but froze up and instead played a joke during The Puppeteer 2.

While liking to have fun, Adrien is more serious, obedient, somewhat insecure, and less lively due to his strict upbringing. If something makes him sad, he usually tries to downplay his feelings on it, like his relationship with his father. He has an easier time letting his feelings show to those whom he is close to. However, Adrien will act on impulse if he is emotional enough, like lying to Théo Barbot out of jealousy about his relationship with Ladybug and sneaking out into the night while unhappy on Christmas, missing his mother. He feels that his father is overprotective, causing him to occasionally act rebelliously, like going places with his friends or alone without informing his family and taking things that don't belong to him, though the former case was caused by his father's over-protection.

His desire to be loved makes him vulnerable whenever disappointed by those he cares for, as seen when Ladybug didn't show up for their date in "Glaciator". Family related issues also strike him emotionally, even the simple situation when his father doesn't show up to spend dinner with him.

Adrien usually thinks reasonably and will express distress and frustration when someone is being difficult or something is going wrong, especially in Plagg's case. However, according to Gabriel, Adrien is very similar to his mother, describing them as "dramatic" and "headstrong when in comes to other people's safety". He can be rather reckless with or without the mask, insisting on fighting Riposte with a sprained ankle in order to protect his crime-fighting partner. This was seen again to a more dangerous extent, like when he had his ribs broken as a result of his Cataclysm being used against him. On the verge of dying, he insisted on continuing to fight anyway showing his will and determination to help even if restrained.[48] On certain occasions, Adrien (as Cat Noir) can be hasty sometimes, evidently when rushing to face certain akumatized villains without a plan. Due to this rashness, he often needs to be restrained or stopped by Ladybug or Master Fu.

At times, Adrien can be persistent when wanting to figure something out, as seen when he continuously bribed Plagg with cheese until he spilled the truth about what Ladybug was hiding from him. This trait is highly apparent in his romantic pursuit of her, to the point where both Marinette (referring to Cat Noir) and Kagami believe that he is stubborn. However, like Alya Césaire, he places extreme values on the mutual trust he has with Ladybug, respecting her decision to keep her identity secret and eventually her secrets with the Guardian. According to Ladybug, Cat Noir does annoy her a lot, but he has never lied to her. Per her wishes, he is secretive to others about his personal life such as his love towards her, partially telling his true feelings to her aforementioned friends. 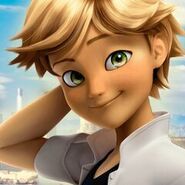 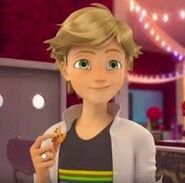 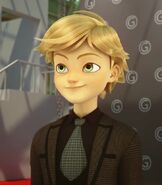 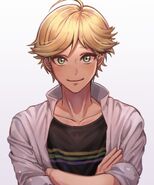 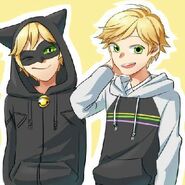 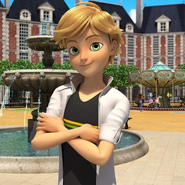 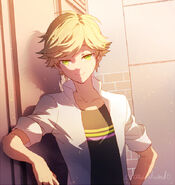 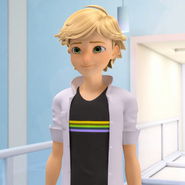