All Male Characters Wiki
Register
Don't have an account?
Sign In
Advertisement
in: Characters, Cartoon Characters, Series Characters,
and 11 more

Prince Ali is the crown prince of the Achu Kingdom.

Prince Ali is kind and fun-loving. Due to his royalty, he is expected to act regal and to be safe, which he finds difficult, considering that he greatly enjoys doing new and exciting things. He feels constrained by his schedule and his chaperone's watchful eye, as while he has a good heart and likes helping others, he wants to do things on his own terms, and he understands when risks and detours should be taken. Able to recognize authenticity in people, he doesn't like good actions coming from selfish reasons, but he appreciates real, genuine compassion. 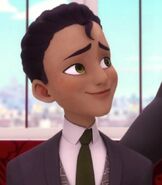