All Male Characters Wiki
Register
Don't have an account?
Sign In
Advertisement
in: Characters, Cartoon Characters, Series Characters,
and 16 more

André Bourgeois is the mayor of Paris and the owner of Le Grand Paris. He is also the husband of Audrey Bourgeois and the father of Chloé Bourgeois.

André is an approachable and regal man, though he is very willing to be manipulative, deceptive, and degrading when it comes to his political or personal goals. Rather prideful, André tends to care more about his wealth, prestige and Chloé Bourgeois (André's daughter) than the welfare of the people of Paris. He enjoys being rich and making more money as he notably allows Jagged Stone and his crocodile to occupy a room at Le Grand Paris upon learning that he is rich, but he doesn't like losing money. While capable of acting like a proud leader, he can also be quite a coward. If he is facing a villain or his daughter is in danger, André can easily become terrified and unsure what to do, but he will act professionally despite his fear under some circumstances. When serious, he knows when to listen to advice and commands from others, most notably from Ladybug and Cat Noir. He is easily persuaded by his family when they urgently need something, and scrambles to do their bidding, not caring if it is unfair. While André is typically more calm than passionate, he'll get angry when he feels like someone is harming or disrespecting him or something he cares deeply about. Specifically, his love for his daughter leads him to become furious if she is wronged in some way or in peril.

Although open and prone to questionable choices and responses, André figures out his wrongdoings every once in a while. He sometimes unprofessionally jumps to conclusions about situations and demands action that goes against the law, but when he realizes his mistakes, he does try to learn from them and make things right with anyone he wronged, such as Roger Raincomprix in "Rogercop". In another instance of this, in "Reflekta" he initially agrees to help the title villainess trick Ladybug and Cat Noir for Reflekta's promise to turn him back to normal in return, but later regrets his actions and agrees to Ladybug's request to drive Juleka back to school from the TVi studio. Albeit an egocentric leader, André can be genuinely kind and patient. He is grateful for good, hardworking, and brave civilians and heroes that thrive in Paris. 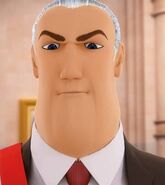 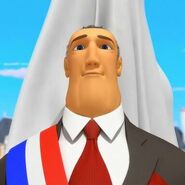 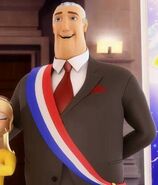