André is friendly, jovial, and good-natured. He warmly talks with his customers, and he is enthusiastic about making ice cream. When his ice cream is ruined, although upsetting to him, he takes it as best he can, kindly thanking Cat Noir for complimenting his ice cream despite him crashing into a container of ice cream and accidentally using Cataclysm on a serving he just prepared. He is a strong believer in the power of love, and he doesn't boast about how his ice cream brings couples together. 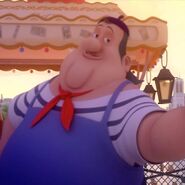