Barkk is the kwami who is connected to the Dog Miraculous.With his power, its wearer can use the Miraculous to transform into a dog-themed superhero. He is currently dormant in his Miraculous in Master Wang Fu's Miracle Box, as seen in "Sapotis". 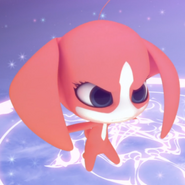 Add a photo to this gallery
Retrieved from "https://all-male-characters.fandom.com/wiki/Barkk?oldid=3267"
Community content is available under CC-BY-SA unless otherwise noted.