All Male Characters Wiki
Register
Don't have an account?
Sign In
Advertisement
in: Male Villains, Villains, Teenagers,
and 16 more

Bubbler is the akumatized villain of Nino Lahiffe.

As Bubbler, he becomes less caring and more aggressive, being much wilder and louder than normal. Although one of his intentions is to let Adrien have the birthday party that he never gets, he also despises adults and uses his powers to get rid of them. His hatred can extend to his peers if they defy his orders. As Bubbler, if anyone doesn't listen to him, they get trapped in a bubble. His rage proves to even be an issue for Hawk Moth when he traps Ladybug and Cat Noir and sends them into the sky instead of taking their Miraculouses. 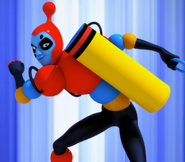