All Male Characters Wiki
Register
Don't have an account?
Sign In
Advertisement
in: Male Heroes, Characters, Series Characters,
and 12 more

Chris is small and funny. He considers himself a big boy, that's why he is capricious and rebellious when Marinette wants to play with him with toys, making him extremely hard to get along with. Despite having a lot of toys, he thinks dolls are for small children, and his toys are different. For this reason, he does not like to watch cartoons intended for younger people and protests when someone says he is too young to play certain games. However the boy is highly curious, hinted by how excited he is at the gifts that Marinette hides from him. He can be skeptical, but if someone doesn't admit to lying after he calls them out, he is quick to believe them. This is shown when he does not believe in the words of Marinette that she is Santa's elf, but believes it soon after calling her out, hoping that the girl will get the perfect gift for him. He hates the term love and thinks it's horrible, but he also knows how to be polite, greeting Ladybug while Cat Noir takes him away. 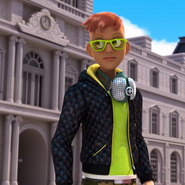 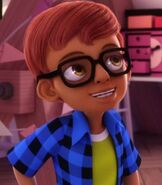