Dark Owl is the akumatized form of Mr. Damocles.

As Dark Owl, he is vengeful towards Ladybug and Cat Noir for accidentally humiliating him, and desires to do the same thing to them. He strives to be the only hero in Paris, aiming to get rid of Ladybug and Cat Noir to achieve his goal. Despite his plans and hostility towards the heroes, Dark Owl isn't needlessly evil, even chiding Ladybug and Cat Noir for believing he would really harm a kitten when his scenario is revealed to be a fake, and is still a man of his word, releasing the heroes from danger after they make the gesture of surrendering their Miraculouses. 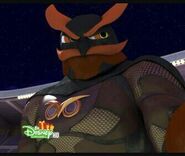