All Male Characters Wiki
Register
Don't have an account?
Sign In
Advertisement
in: Male Villains, Villains, Characters,
and 11 more

Evillustrator is the akumatized villain of Nathaniel Kurtzberg.

Evillustrator ("who is based on "Super Nathan") is more confident and direct, such as when he literally barged into Marinette's bedroom and asked her out to celebrate his birthday with him. Even when akumatized, he still genuinely cares for her, promising her that he would stop attacking Chloé and even defying Hawk Moth for a while when his date was at stake. However, he is furious when humiliated or tricked and he can be short-tempered and reckless - his response to Marinette betraying him was accusing her of being just like Chloé. 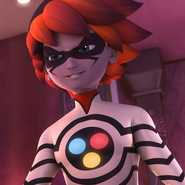