For a crocodile, Fang acts rather tame as he is never seen attacking people and seems fine with being a pet. As seen in "The Collector", where he seems to enjoyed his owner's performance. He also has some dog-like behaviors as he wags his tail and hangs his tongue out of his mouth, as seen in "Pixelator". Fang doesn't like being pestered and growls at Bob Roth. 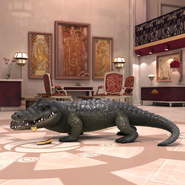 Add a photo to this gallery
Retrieved from "https://all-male-characters.fandom.com/wiki/Fang?oldid=3238"
Community content is available under CC-BY-SA unless otherwise noted.