Start a Wiki
Frozer is the akumatized villain of Philippe.

As Frozer, he is determined to turn Paris into a city of ice and take Ladybug and Cat Noir's Miraculous for Hawk Moth. He is incredibly confident and proud of his skating abilities, which eventually led to his downfall. 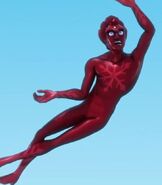 Scarlet Frozer.
Add a photo to this gallery
Retrieved from "https://all-male-characters.fandom.com/wiki/Frozer?oldid=2881"
Community content is available under CC-BY-SA unless otherwise noted.