All Male Characters Wiki
Register
Don't have an account?
Sign In
Advertisement
in: Characters, Series Characters, Cartoon Characters,
and 19 more

Gabriel Agreste is a famous fashion designer who created and owns the brand Gabriel. He is also the husband of Emilie Agreste and the father of Adrien Agreste. Her supervillain name is Hawk Moth who are the main antagonist of Miraculous the Tales of Ladybug and Cat Noir.

Gabriel comes off as a cold, harsh, and very strict man. He is very protective of his son Adrien, having kept him home for most of his life, although having a possessive and distant relationship with him. He makes executive decisions about how to keep his son safe without considering how he may feel, such as when he unjustly deems Nino Lahiffe a bad influence for Adrien and forbids him from coming to his home ever again. Gabriel misses his wife greatly and sometimes has to be reminded not to forget that his son is also grieving. According to Adrien in "Adrien's Double Life", ever since the disappearance of his wife, he is a changed man. He also strongly dislikes taking orders from anyone, even if they are from people who are trying to help and protect him, such as Ladybug and Cat Noir. Despite this, Gabriel can be respectful and kind at times, especially when needing to act professionally. 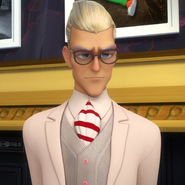 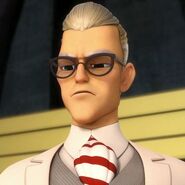 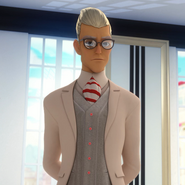