All Male Characters Wiki
Register
Don't have an account?
Sign In
Advertisement
in: Characters, Series Characters, Cartoon Characters,
and 13 more

Butler Jean is an employee at Le Grand Paris.

Jean is dignified, helpful, and quite polite. In "Mr. Pigeon", when Cat Noir needs a bathroom and Camembert, he assists him. At their request, he also tells Ladybug and Cat Noir about the events with Chloé Bourgeois the previous day in "Antibug". He is willing to pretend to be a supervillain to please Chloé and Sabrina Raincomprix, and he is concerned for Sabrina after Chloé gets upset at her and ignores her. As seen in "Despair Bear", he likes to encourage people's best traits. 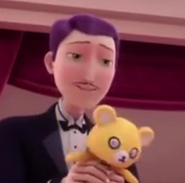