All Male Characters Wiki
Register
Don't have an account?
Sign In
Advertisement
in: Male Heroes, Heroes, Characters,
and 8 more

Longg is the kwami who is connected to the Dragon Miraculous. With her power, Longg's wearer can use the Miraculous to transform into a dragon-themed superhero. He is currently dormant in her Miraculous in Master Wang Fu's Miracle Box, as seen in "Sapotis". He is currently the temporary kwami of Kagami Tsurugi. He was used by Ladybug in Miracle Queen episode.

Longg is a bit formal calling Kagami "young lady" having an eloquent approach and is quite informative and patient explaining her powers. He has a tendency to ramble on a bit not seeing that her wielder is trapped inside an akumatized villain, but knows not to rush as he tried to tell Kagami Ladybug's plans. 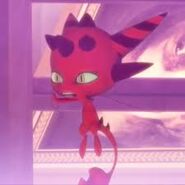