Marc Anciel is a student at Collège Françoise Dupont.

Like Juleka, Marc is very shy and nervous around others. This is shown when Marinette pulls Marc into the art room to introduce him to everyone. He is also quite shy in front of his first friend at the school, Marinette, refusing to show her his stories. He likes to write stories (particularly about Ladybug and Nathaniel) but is sheepish and self-conscious when people read them. When he runs away in embarrassment out of the art room, he drops his notebook and Marinette picks it up and reads it. When she hands the notebook back to him later on, Marc immediately turns red. Like Marinette, he is clumsy and kind. 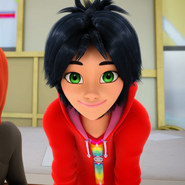