All Male Characters Wiki
Register
Don't have an account?
Sign In
Advertisement
in: Male Heroes, Heroes, Elderly Characters,
and 11 more

Master Wang Fu (Chinese:王富 Wáng Fù) or Master Fu Wang (in western order) was a healer, the Great Guardian of the Miraculouses and the last known remaining guardian from the Order of the Guardians. He gave Marinette Dupain-Cheng and Adrien Agreste their Miraculouses to stop Hawk Moth and his villains' evil-doings. With the Turtle Miraculous, when inhabited by Wayzz, Master Fu transforms into a turtle-themed superhero.

Master Fu is a wise, gentle, and respectful man who is dedicated to keeping Miraculouses out of the wrong hands to maintain balance. He recognizes good heroes as kind, helpful individuals who put others before themselves. Because of his mistake, he is very careful about handing out other Miraculouses to the right people. Fu doesn't consider himself old as believes that he is young compared to their constant companions (who are thousands of years old), but he is still aware of when he can't fix a major issue without help. He can get angry with those who go behind his back or doesn't ask for his permission on occasion, but he also forgiving towards those who admit their mistake.

While he is serious when it comes to his work as a healer and a guardian, Fu can be lighthearted and likes jokes, often slightly teasing Marinette.

According to Marinette, Fu has a bit of a forgetful memory, like when he lost his keys, most likely owing to his old age.

Like Marinette as Ladybug, Fu is known to be cautious and careful, using a false name even before Hawk Moth knew his true name or appearance. He prefers to keep himself and his purpose a secret from most people, aware that villains may come after him or the Miraculouses in the box if he finds out about him. Usually, he doesn't allow people whom he has given Miraculous to meet him unless there is a special reason. 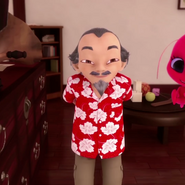