All Male Characters Wiki
Register
Don't have an account?
Sign In
Advertisement
in: Villains, Characters, Cartoon Characters,
and 13 more

Nooroo is a knowledgeable, helpful, and empathetic kwami. He shows a bit of his curious side in "Gorizilla" when Gabriel thought Adrien might be Cat Noir. Like Wayzz, Nooroo has a formal side, calling his holder Master instead of his real name.

Though he reluctantly succumbs to Gabriel's demands to help him get the Ladybug Miraculous and Cat Miraculous, Nooroo is distressed that he is helping someone use the Butterfly Miraculous for evil reasons. When Gabriel later learns that there are more kwamis and tells him that he wants to find them all, Nooroo is scared and concerned for his friends.

In addition to this, Nooroo is sometimes scared of Gabriel and is quite meek with him, such as in “Syren”, when Gabriel interrogated him on how to obtain more powers. In “Sandboy”, when he attempts to sneak away but is caught by Gabriel, he appears frightened and meekly tries to explain his motives. 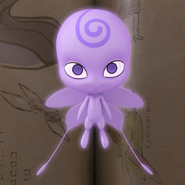