All Male Characters Wiki
Register
Don't have an account?
Sign In
Advertisement
in: Characters, Series Characters, Cartoon Characters,
and 15 more

Otis Césaire is a zookeeper at Ménagerie du Jardin des Plantes. He is also the husband of Marlena Césaire and the father of Alya Césaire, Ella, Etta and Nora Césaire.

Otis is very serious about his job as a zookeeper and he feels that the animals there deserve respect. He doesn't like it when someone insults him and/or the animals. At the same time, Otis is loving and helpful, caring about his wife and daughters. He helps in the search for Adrien Agreste, who is missing, in "Santa Claws", and he and his family come to check on him once he is safe at home. 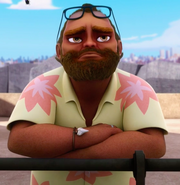