Pegasus is the superhero identity of Max Kanté.

As Pegasus, Max is also brave as well as shown to be very polite and works well with others seen in "Party Crasher". 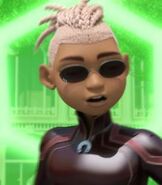 Add a photo to this gallery
Retrieved from "https://all-male-characters.fandom.com/wiki/Pegasus_(Miraculous_Ladybug)?oldid=3199"
Community content is available under CC-BY-SA unless otherwise noted.