All Male Characters Wiki
Register
Don't have an account?
Sign In
Advertisement
in: Characters, Series Characters, Cartoon Characters,
and 10 more

Philippe is a figure skating trainer who appears in Season 2 of Miraculous: Tales of Ladybug & Cat Noir.

Phillipe is a passionate ice skater. He regards his ice rink as his life and is enthusiastic on promoting his lessons.

He can be persuasive when wanting something, such as when he tried to convince Santa Claus to have Christmas come early. Phillipe is also helpful at times like when he held off Christmaster's army while Ladybug, Cat Noir and Santa escape. 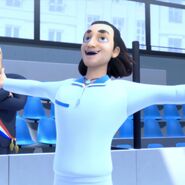