All Male Characters Wiki
Register
Don't have an account?
Sign In
Advertisement
in: Male Heroes, Heroes, Black Characters,
and 14 more

Whenever he is not active, Plagg's Miraculous lays dormant in Master Wang Fu's Miracle Box, whilst he himself resides inside the box with the other inactive kwamis.

As of "Ladybug & Cat Noir" Plagg and his Miraculous become active. His current and prominent owner is Adrien Agreste who uses the Cat Miraculous to transform into the superhero Cat Noir, to protect and keep the citizens of Paris safe from danger, as well as defeating akumatized villains. Plagg is one of major recurring characters in Miraculous Ladybug.

At his best, Plagg can be described as being carefree and easygoing. At his worst, he is negligent, overindulgent, lazy, and sour. He isn't very helpful and doesn't take situations quite as seriously as he should.

According to Adrien, he is out of control and arrogant. According to Wang Fu, Plagg is reckless and rebellious without the guidance of an owner and when he disobeyed Master Fu's order to stay put. He calls himself brave and a free-spirit. Unlike Adrien, he doesn't mind being cooped up and is willing to look on the brighter side of things.

Often making bad choices, Plagg can be quite troublesome, like playing with Chloé's bracelet and causing an argument of it being stolen in the class after it gets stuck on his head. He seems to find others' misfortunes amusing, especially Adrien's, along with dirty secrets that they keep. He can be quite curious at times when he flew off into Chloé's bag, wanting to see who Ladybug really was, or know what was in Gabriel's safe. Plagg is snarky and can be a bit of a prankster at times, often making sarcastic comments and enjoyed playing the piano with Adrien, as well as playing with one of the wax figurine heads.

However, Plagg will be serious if the situation requires him to. He tried to stop Adrien from transforming as he hadn't finished explaining everything about the Cat Miraculous and thinks Adrien's idea to talk Volpina out of causing harm isn't as useful as being Cat Noir.

Yet, unlike Tikki, Plagg is more secretive towards his holder, refusing to tell any secrets about Master Fu to him. Unlike Adrien, he is more cautious around those who are suspicious or sneaky and, like Trixx, is a good judge of character as he described Lila as not a good friend for Adrien.

Quite the picky eater, Plagg only enjoys eating cheese, especially Camembert, which Adrien will feed him not only in order to fuel his transformation into Cat Noir, but also to bribe him when he isn't being helpful. He will also get distracted by anything that resembles Camembert, including the objects around Adrien's room during his first time there and Chloé's bracelet. Also, according to Adrien, due to his obsession with cheese, Plagg has a bit of a one track mind with Adrien believing, "He's always thinking with your stomach". 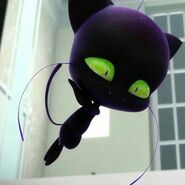 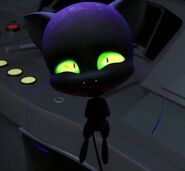 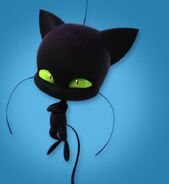 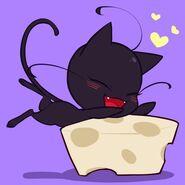 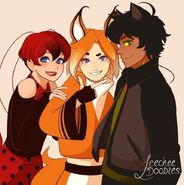 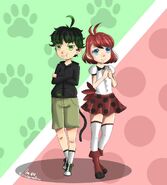