All Male Characters Wiki
Register
Don't have an account?
Sign In
Advertisement
in: Male Villains, Characters, Series Characters,
and 15 more

Robostus is the akumatized villain of Markov.

As Robostus, he is very sinister, malicious, and demanding. He is very eager to capture Ladybug and Cat Noir's Miraculouses as Hawk Moth requested. Not withstanding, Robostus eventually chooses to disobey Hawk Moth's commands, consequently attacking him and taunting him, because he realizes that the Miraculouses can grant his wish to make him human. Robostus still cares deeply for Max during his akumatization, but when Max betrays him, he decides that humanity is heartless and humans need to be destroyed. Robostus takes pride in his robotic intelligence and strategics, but he fails to consider his own potential for missteps and the cleverness of his enemies. 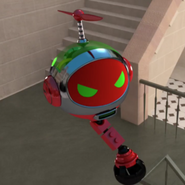