All Male Characters Wiki
Register
Don't have an account?
Sign In
Advertisement
in: Characters, Series Characters, Cartoon Characters,
and 13 more

Rolland Dupain is the paternal grandfather of Marinette Dupain-Cheng.

Rolland is a highly traditional man who enjoys doing things the old-fashioned way. He is very proud of his Gallic heritage and fond of reminiscing over the old days; though, in turn, he is not fond of modern technology or anything he considers non-traditional, being quick to point out when something is not being done the way he thinks it should be done. His fixation with sticking to tradition extends to the point where he isolates himself from the rest of the modern world and even cut ties with his son Tom over him and his wife changing his bread recipe with rice flour.

However, despite this, he can be nice and polite towards others, showing kindness to his flour delivery man and later his granddaughter Marinette when she pretends to be a flour delivery intern named Germaine in order to get into his house. Regardless of his aversion to non-traditional things, he is willing to rely on them under certain circumstances, allowing Cat Noir to rush him back home when he fears his bread or granddaughter could be in danger. Furthermore, after realizing that his son's way of baking bread is just as good as his own, he quickly becomes more accepting of going against tradition and decides to reconnect with his family afterwards. 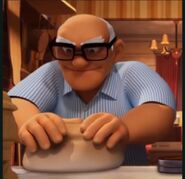