Santa Claus is a man dressed up as Santa for the Christmas season.

Santa is warm, kind, and generous. He enjoys giving to others and helping them out, and he gives useful wisdom to those who need it, like Adrien. However, if he is disrespected or falsely accused of something, he becomes grouchy and upset, along with sometimes not easily forgiving the culprits.

As seen in "Christmaster", he is also very stern and strict towards tradition, refusing to give out gifts to kids early as such, and highly appreciates those who respects them, such as Ladybug. 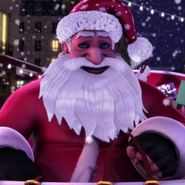