Simon Grimault is a hypnotist.

Simon is soft-spoken, nice, and nervous. He likes his work, but he doesn't lie about his skills. However, he is upset if he feels wronged, bothered that he is kicked off The Challenge despite it being Gabriel's fault that he failed his task. 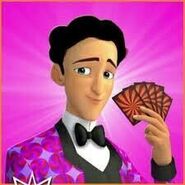 Add a photo to this gallery
Retrieved from "https://all-male-characters.fandom.com/wiki/Simon_Grimault?oldid=3161"
Community content is available under CC-BY-SA unless otherwise noted.