The Collector is the akumatized villain form of Gabriel Agreste.

As The Collector, being a voluntary akumatized villain, his personality doesn't change much. He is obsessed with collecting everything he likes to replace the Miraculous spellbook but is still determined to take Ladybug and Cat Noir's Miraculouses. He also knows that he must protect his secret identity, telling the heroes that he would give their Miraculouses to Hawk Moth in order to throw them off his trail. 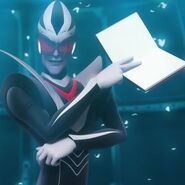 Add a photo to this gallery
Retrieved from "https://all-male-characters.fandom.com/wiki/The_Collector?oldid=3020"
Community content is available under CC-BY-SA unless otherwise noted.