All Male Characters Wiki
Register
Don't have an account?
Sign In
Advertisement
in: Genderless, Characters, Miraculous Ladybug Characters,
and 10 more

Trixx is friendly, encouraging, wise, and a good judge of character, as he identifies his new wielder's best qualities very easily. He is honest when something impresses his, like Alya quickly figuring out he transforms her with the Fox Miraculous, but he is smart in giving good advice without being rude or blunt, as seen when Nino questions Alya about her decision in not telling him her secret.

Similiar to Tikki, Trixx is also very understanding of others' actions after the mission was over in "Sapotis", when he heard that Alya made a promise to return the Miraculous. He was willing to return to the necklace without any resistance and also understood Alya's burning desire to continue helping her new teammates by commenting that the three of them would make a good team. 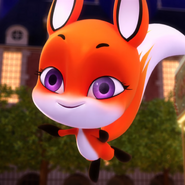