All Male Characters Wiki
Register
Don't have an account?
Sign In
Advertisement
in: Characters, Cartoon Characters, Series Characters,
and 9 more

Xuppu is the kwami of Jubilation who is connected to the Monkey Miraculous. With his power, Xuppu's wearer can use the monkey Miraculous to transform into a monkey-themed superhero. He is currently dormant in his Miraculous in Master Wang Fu's Miracle Box, as seen in "Sapotis". In "Party Crasher", he becomes active to help Lê Chiến Kim transform into King Monkey.

Not much is known about Xuppu except he's mischievous and playful. He is also easily offended as shown when Kim called him a plushie. 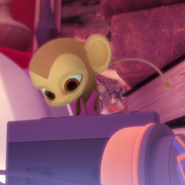